Adrian Houston presents his work from the “A Portrait of the Tree” Exhibition. 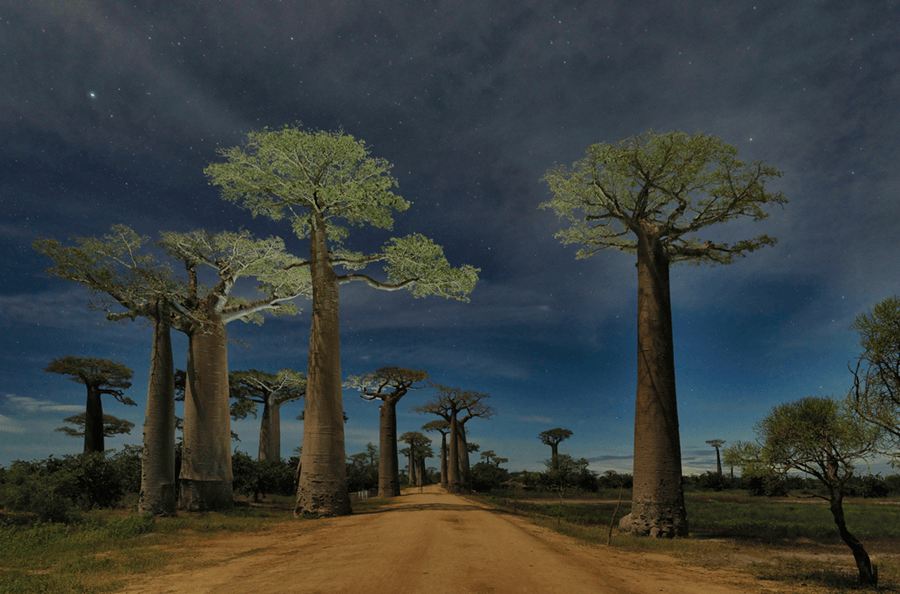 “When photographer Adrian Houston asked me what my favourite tree is, I had to think about it for a moment. Firstly, it’s an unusual question, and secondly, I love lots of different types of tree, both here in the British Virgin Islands and from memories of my childhood in the English countryside. However, in the end I went for the baobab tree.

“I first saw these trees in Madagascar, when I travelled through the country on a lemur conservation trip. Of the nine species of these somewhat bulbous, unusual trees, six are native to Madagascar. They left us entranced as the lemurs leapt amongst them, and seemed to contain just a little extra magic.

“To sing the baobab’s praises even more, back in May I met with Isatou and Paul from the award-winning Drink Baotic. They had won a regional leg of the Virgin Media Voom Tour, and – you guessed it – the source of their health drink is baobab super fruits. They even gave me four Baotic Grow your Own Baobab Bonsais for my grandchildren. Perhaps we’ll have our own baobabs one day!” 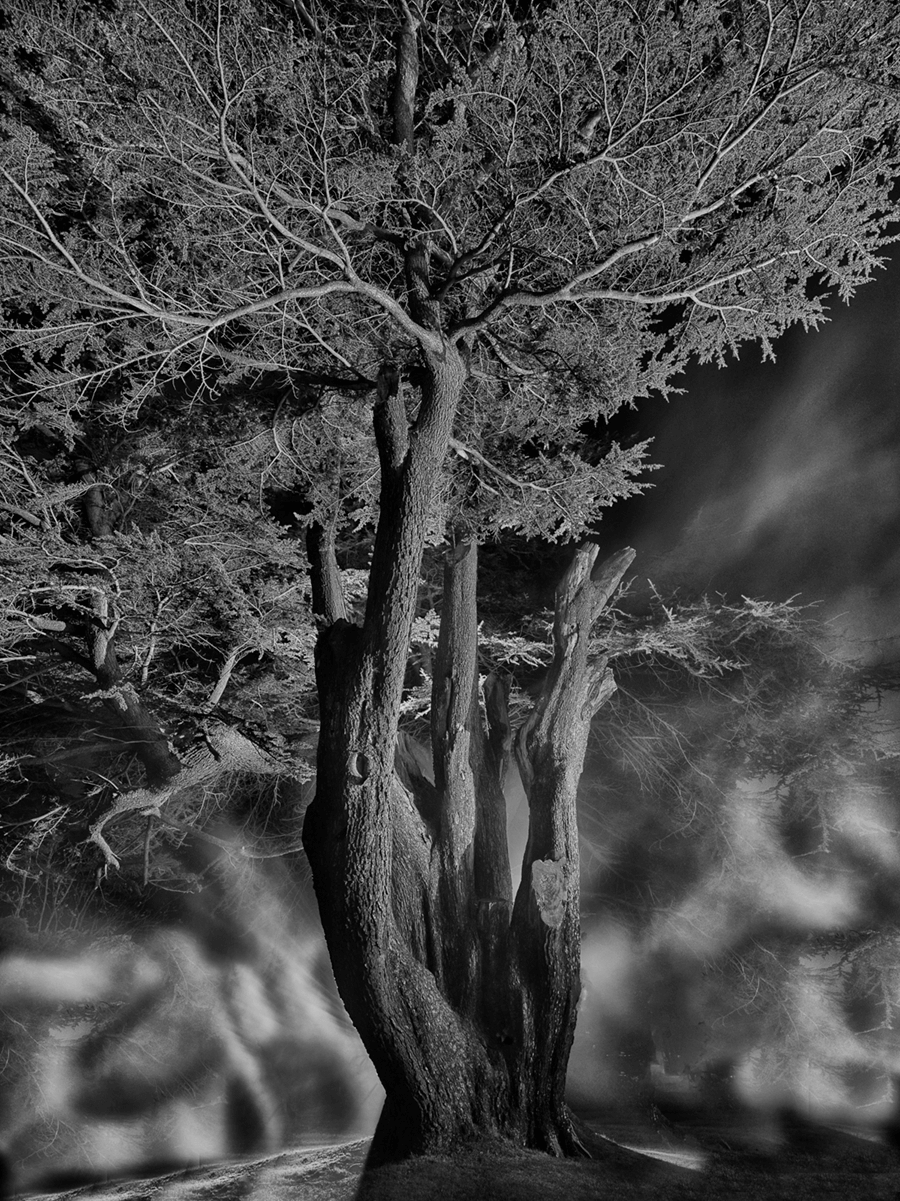 “I worry about my tree the way I used to worry about my Dad. He was very old at 93 when he died but all I remember was how old he always seemed to my young self as I grew up. I used to look at him last thing before bed and try to memorise his features in case he wasn’t alive in the morning.

“My tree is nearly 800 years old. It was brought back from the Fourth Crusade by a Knight of the Court of Richard the Lionheart and planted at Fordell as he set about building his castle in the early 1200s. The tree and the castle are still there. This grand old Cedar of Lebanon has weathered much. Just a few years ago a great storm sheared off a massive limb, 10 metres long and 1 metre in diameter. We cut it up and made coffee tables. There is evidence of rot in the base of the tree on one side. I know that this may be its undoing one day. I worry about my tree.”

“Adrian Houston loves trees and veteran oaks in particular.  There are hundreds of ancient oaks in the park at Hatfield, relics of a medieval system of coppicing.  These are among our great treasures and we try and cosset them in their old age.  Adrian’s work among our Hatfield trees shows he understands them and how they are part of us.  I grew up with them and they are part of me too.  Were disease to carry them off, it would be a mammoth step towards dystopia.” 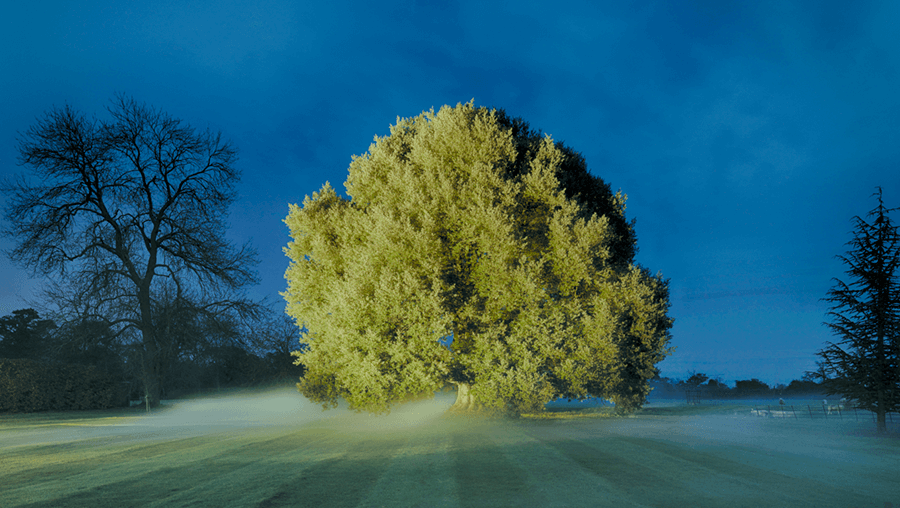 “One of the reasons we fell in love with our house, Wolverton Hall, near Pershore in Worcestershire, was the evergreen holm oak. It stands magisterially at the end of the lawn, with a near perfect silhouette. Viewed from my bath tub, it fills the entire view. I had always wanted to be the owner of an alpha tree, and the holm oak fulfilled this ambition completely. Nobody knows how old it is, but the local tree expert believes it was planted between 1840 and 1860, during the ownership of the Acton family who built Wolverton Hall in 1707.

“Three years after we moved to Wolverton, a terrible disaster struck the tree. I heard about it in Mumbai airport, while waiting at the carousel for my luggage. My mobile rang, it was the tree expert. The holm oak had been struck by lightning, and the trunk split down the middle, right down to ground level; you could see an inch-wide gap through the whole trunk. The remedy was drastic. We had to remove 35 percent of the weight of the tree, and then have a steel brace fitted. It was fired in a furnace in Wolverhampton, and took three weeks before it could be fitted, during which time the tree could have collapsed in two at any time. At last the job was done.

“The poor holm oak looked distinctly sick for the next three years, and rather lopsided. I prayed weekly for its recovery. Then slowly, by the healing powers of nature, it regained its shape. We were blessed to save it. The holm oak of Wolverton is like rooks in the Tower of London, or the Barbary apes on the rock of Gibraltar. So long as the Quercus Ilex stands, the Coleridges will stand too.” 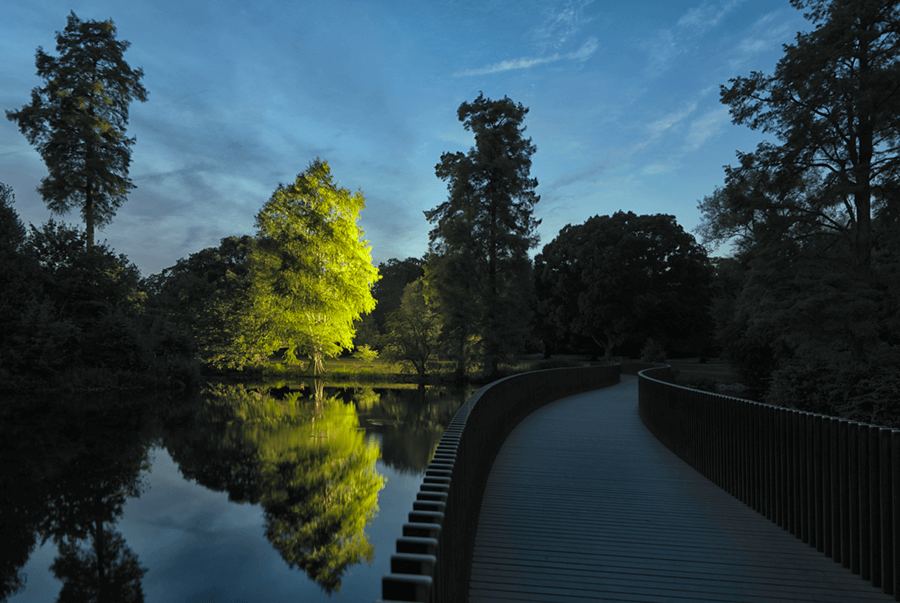 “The 300-acre arboretum at Kew holds one of the most diverse collections of temperate trees to be found in any other garden in the world, including many species of rare trees that cannot be found growing in any other gardens. This Montezuma cypress, a deciduous conifer native to Mexico, was planted in 1908 and is more suited to a warmer climate, but grows well by the lake at Kew, holding onto its leaves well into the winter and producing some of the best autumn colours to be seen. At any time of day or year, I always take time to stop and admire this majestic tree whenever I cross the Sackler Crossing.” 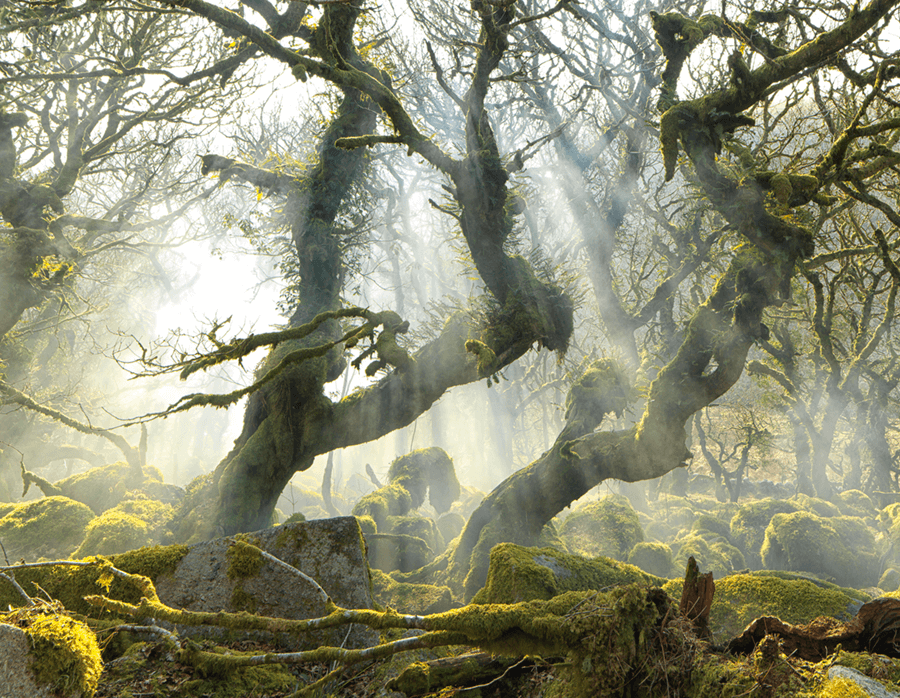 “I first came to Wistman’s Wood with my dad who was photographing it for this exhibition. This wood dates back thousands of years and has an atmosphere that will always stay with me. I remember being touched by its ancient trees that are said to have been planted by the druids. Perched on a steep hill on Dartmoor, it left me with a lasting impression of the ancient world.” 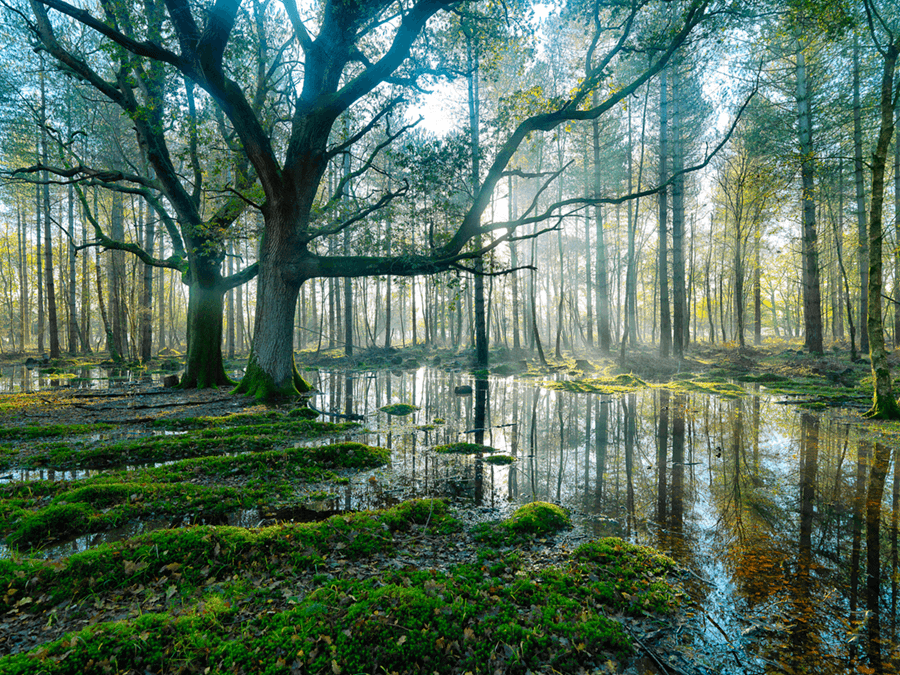 “The New Forest was is one of the last remaining unenclosed pasture lands in south east England. Once proclaimed the playground of William the Conqueror, today it remains a habitat for many rare birds.

“In this photograph the way the light shines through the trees with the oaks silhouetted is mesmerising.  This beauty and tranquillity have stayed with me ever since I walked through the New Forest for the first time. One of the best therapies one can have is a simple walk in the forest gazing at the trees.” 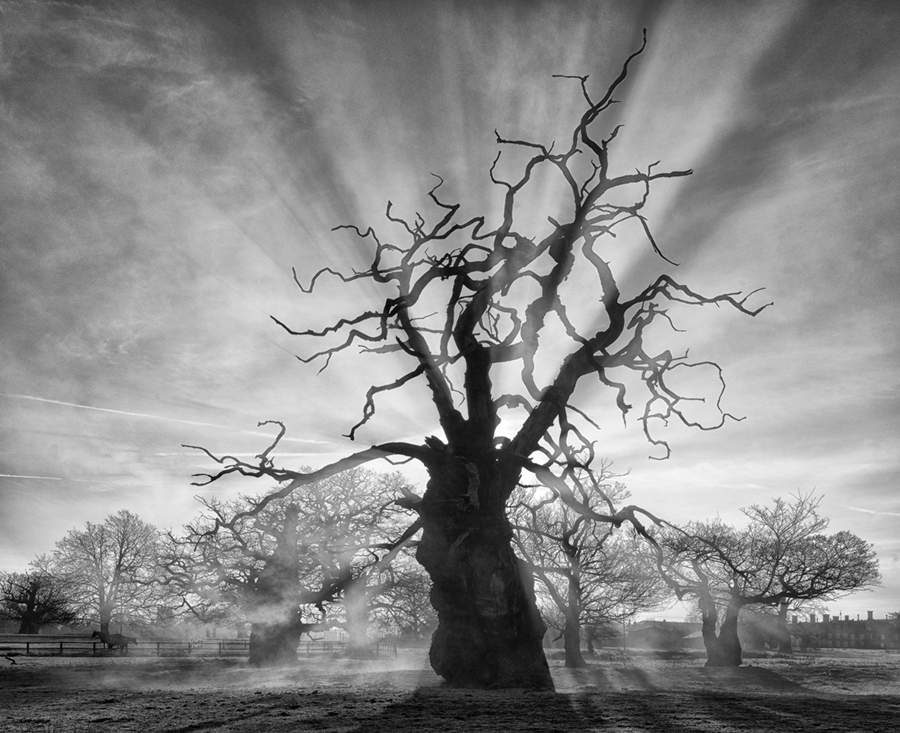 “HM The Queen for many years stayed at Helmingham Hall during the month of November. This was the oak in whose hollow trunk she used to shelter when walking in Helmingham Park.” 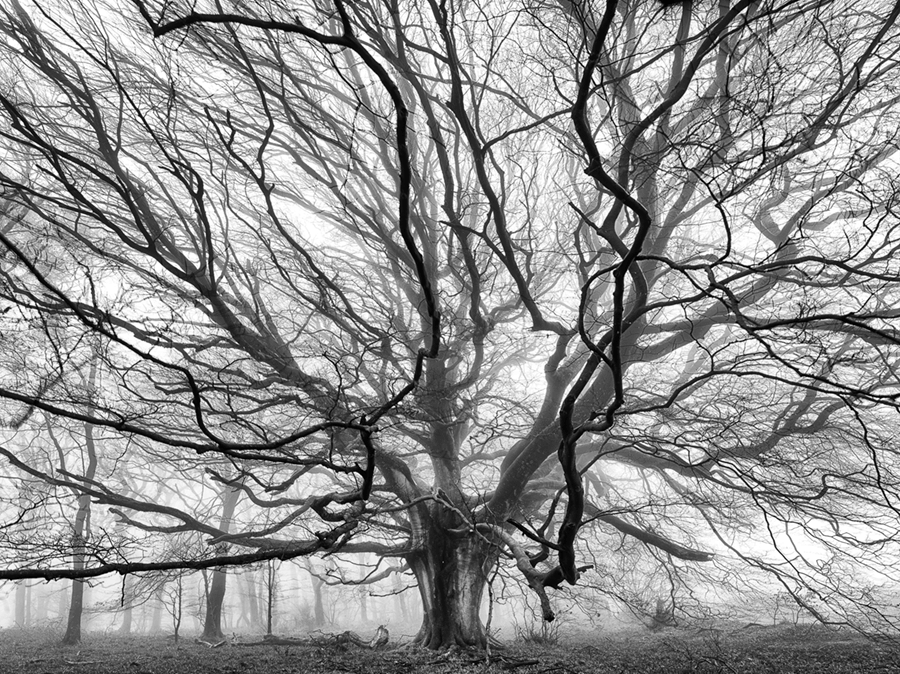 “For more than 20 years we lived in a tiny brick and flint cottage in a 60 acre wood in Chettle, Dorset, one of the most remarkable villages in England. Until a short while ago it was owned by one family and the woodland was quite productive. We used to harvest firewood and others would coppice hazel for fencing and charcoal too with a giant metal charcoal burner.

“But the star of the show is a beech tree which borders a track known as Chalk Walk on the edge of the wood. At a guess it must be 500 years old. It is huge, so much so that you can clamber up the trunk and sit in the middle. The village children used to do this; they also attached a swing to one of the branches. My own children, Jack and Lara, were endlessly fascinated by it and they used to also play in it. I once took them for a picnic in the tree. It is a thing not only of beauty but of immense power and the wood – even in summer – is dark and a spooky air pervades around my old beech tree.” 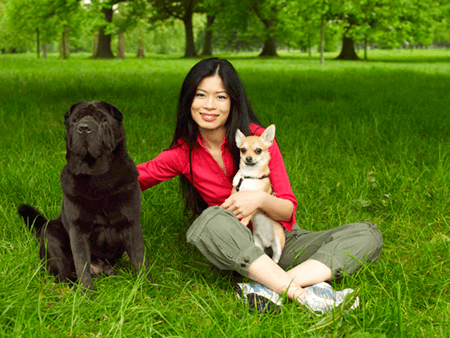 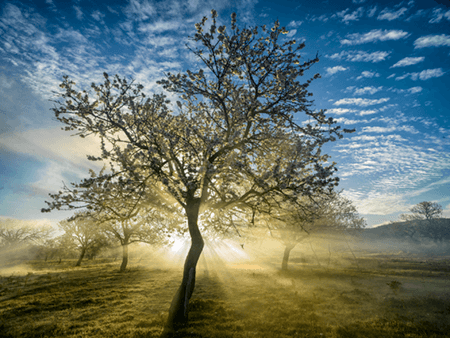